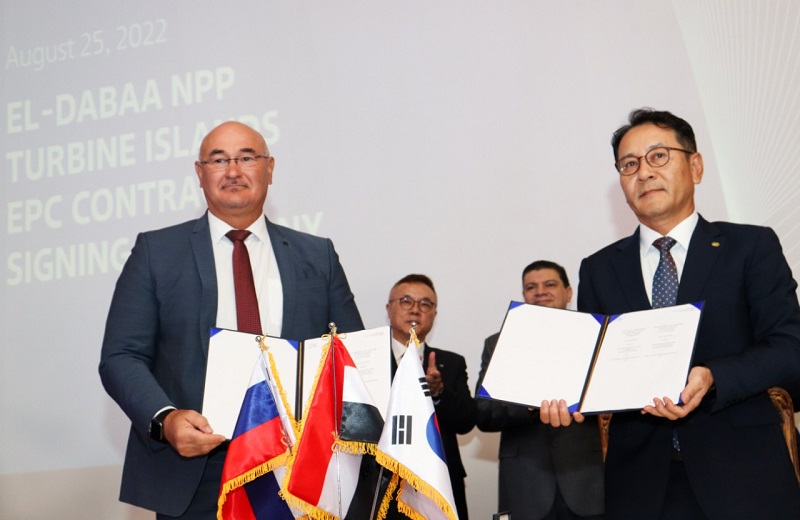 Rosatom engineering division (Atomstroyexport JSC) and Korea Hydro and Nuclear Power Co. Ltd. (KHNP) have concluded a contract for the construction of turbine islands under the El-Dabaa NPP project in Egypt. According to the agreement, the Korean company will construct some 80 buildings and structures at four units of the power plant and will procure and supply equipment and materials for the turbine islands.

“The contract with Atomstroyexport JSC for the construction of the turbine islands can be seen as a significant achievement for Korea confirming our great capabilities for project construction and management that have already been demonstrated in the UAE. Building upon our experience acquired in the UAE, KHNP will do its best for the successful implementation of the El-Dabaa NPP project,” said Jooho Whang, KHNP CEO. 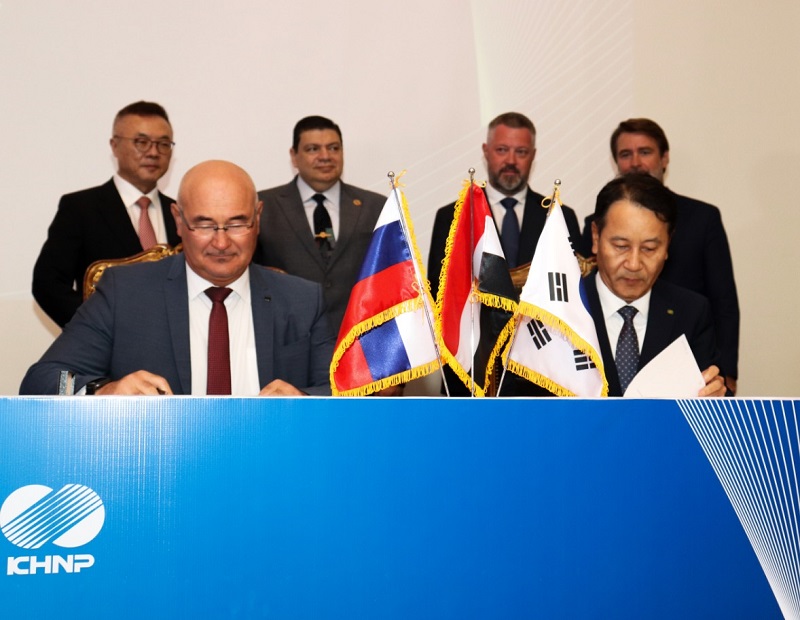 Substantial preparatory work preceded the signature of the contract. Upon the results of the consultations held in December 2021, Rosatom approved KHNP as a sole bidder that was admitted to the discussions and conclusion of the contract for the planned deal, provided KHNP complied with the ASE JSC procurement requirements and the parties reaching agreement on such terms and conditions.

“Nuclear energy does not only play an important role in meeting the increasing demand for electricity and achieving carbon neutrality but it also brings nations together. We at Rosatom strongly believe that nuclear cooperation must not stop in these turbulent times. On the contrary, it is of paramount importance to develop and expand it further benefitting our countries,” Director for International Business at Rosatom Boris Arseev said at the signing ceremony.

“In July, the project has entered the construction stage. The El-Dabaa NPP is an attractive project for international companies. KHNP is joining pool of qualified participants, among which are major Egyptian companies selected for construction works at the site,” said Alexander Korchagin, Atomstroyexport JSC Senior Vice President for NPP construction project management. “I am confident that only through well-coordinated joint work of the Russian, Egyptian and Korean teams we will be able to successfully deliver this ambitious project.”

El-Dabaa NPP is the first nuclear power plant in Egypt. It will be constructed in the city of El-Dabaa, Matrouh Governorate, on the Mediterranean coast, roughly 300 km north-west of Cairo. The NPP will consist of four power units with an electrical output of 1200 MW each equipped with Generation III+ VVER-1200 reactors (pressurized water reactors). This is a technology of the latest generation that already has project references and is being successfully operated. There are four operating units in Russia equipped with such reactors: two at each of the sites of the Novovoronezh and Leningrad nuclear power plants. Outside Russia, a VVER-1200 reactor-based power unit was connected to the grid at the Belarusian NPP in November 2020.

The El-Dabaa NPP is being constructed according to the package of contracts that came into effect on 11 December 2017. Pursuant to contractual obligations, the Russian party will not only build the power plant, but also deliver Russian nuclear fuel for the entire life cycle of the nuclear power plant, as well as assist Egyptian partners in personnel training and support them in the plant operation and servicing over the first 10 years of its functioning. Within the framework of one more agreement, the Russian party will build a special storage facility and deliver casks for storing spent nuclear fuel.

The Engineering Division ranks first in the world by the order portfolio and the number of NPPs constructed simultaneously across the world.

About 80% of the Division’s revenues originate from foreign projects.

The Engineering Division implements construction projects for high-power NPPs in Russia and across the world, renders a full range of EPC, EP, EPC(M) services including project management and design activities, and develops Multi-D technologies for the management of complex engineering facilities. The Division relies on the achievements of the Russian nuclear industry and innovative state-of-the-art technologies.

We construct reliable and safe NPPs with Gen III+ VVER reactors that are in line with all international requirements and recommendations.