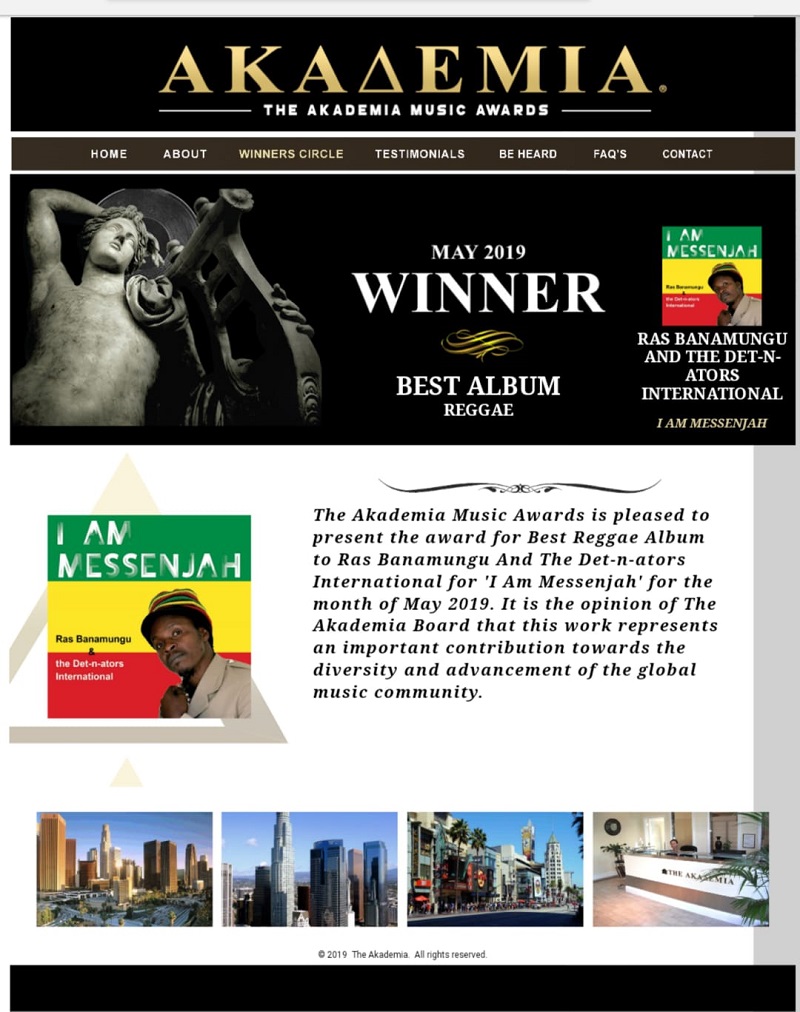 Finding my attention being drawn to the great anticipation that is filling Western Australia right now – concerning the forthcoming release of Ras Banamungu and the Det-n-ators International new album ‘I am Messenjah’ – I lost no time in procuring an interview with the lively Rastaman Ras Banamungu and his friend, bandmate and songwriting partner Steve Dean. As a musical project, the duo began as Abadahigwa International Movement (AIM), but later changed to Ras Banamungu and the Det-n-ators with new band members joining on their return to Australia after their original meeting in Rwanda, while both involved with a humanitarian project.

As a teacher of God, Steve was impressed by how closely Ras Banamungu’s Rastafarian ideals related to his own A Course in Miracles-inspired knowledge and this understanding can be heard clearly in their song lyrics.

Since then, they have gone from strength to strength, recently culminating in their second prestigious Akademia award for ‘I am Messenjah’ as best reggae album of the year, and that’s worldwide. Already on Spotify, the songs are breaking new ground in combining rock, reggae and spiritual sounds that are pleasing a great many these days and finding new listeners every minute.

Alongside that, following an electrifying live performance of ‘I am Messenjah’ at a recent Coast to Coast concert in Melbourne, Ras Banamungu and the Det-n-ators International were judged a very respectable 5th among many performers. However, they were still rapidly chosen for promotion due to their joyous reception and sheer commercial strength of the song.

“I was very impressed with Ras Banamungu’s ability to make up catchy choruses out of thin air”, says Steve. “He plays great drums and bass too, but usually in the studio”, he added.

“‘Abadahigwa’ means undefeatable where Ras Banamungu comes from,” says Steve. “It’s a great name there, but we renamed it all in Australia as we needed to adopt a more familiar title.”

“The band has no fixed members, beyond Steve and I”, comments Ras Banamungu “Anyone who can make a positive contribution is invited. There are some great musicians on the album.”

Both Ras Banamungu and Steve then said they’re looking forward to touring the stages of the world at some point not too far off. With music and message as strong as theirs, the world, I think, is about to discover them wholly.